Why Kids Should Learn Coding – Why Coding Important – In a society that coexists with computers, we are in an era where people who know how to program and modify computers are needed. Richard Branson, the founder of the Virgin Group, said: “Whether we fight climate change or go to space, we can’t go on without a computer, and there aren’t enough people to code at an early stage. 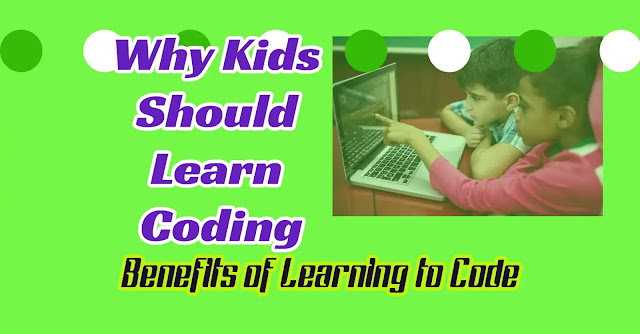 Teaching helps revitalize school classrooms by building skills and confidence and providing opportunities for hands-on learning. ”Computer coding plays an important role today and in the future, and our children play a key role in it.
People May Also Search
You should learn how to do it without hesitation. Coding is essential to software development and you cannot complete a web application, robot, or video game without using code.
Anyone, regardless of age, can learn how to write code. Many go to school to learn to code, while others are self-taught.
When it comes to the younger generation, many people start in their early teens or as early as 7-8 years old. that encourage young children, especially girls, to actively learn.
“Coding is the language of the future and should be learned by every girl. Watching girls grow and learn in our classroom, coding is fun, collaborative, and creative. I feel that.”— Reshma Saujani, Founder, Girls Who Code.
“It never took time to realize that code is a superpower that should be accessible to all young women. Code is the basis (and invisible) of technology.
Understanding that it is a framework means that you do not have to be a passive bystander in the ever-changing digital world.” —Karlie Kloss, Founder, Kode with Klossy Scholarship.

Is there a better way for boys and girls to broaden their horizons? Not only will it help you grow in your childhood, but it will continue to help you in the future.

High brain activity is found in five different areas of the brain, which can be useful for excellent training of human thinking and learning skills.

In the future, understanding coding will help you understand how computer programs work and start your business. You can also have a successful career as a computer developer or programmer.

Bill Gates, the co-founder of Microsoft and co-chairman of the Bill & Melinda Gates Foundation, said: “By learning to write programs, you can expand your thinking abilities, get better ideas, and create thought circuits that are useful in all areas.”

Stephen Hawking, a theoretical physicist, cosmologist, and author, said: “Basic computer programming is an essential skill for learning, whether you want to reveal the secrets of the universe or pursue a career in the 21st century.” Computer programming is computational, logical, and structural. , And helps develop algorithmic thinking.

It is a well-known fact that we are living in an era of great technological development and future generations will come into contact with technology at an early stage.

Today’s kids are more into playing with computers and tablets than going out to the playground. Excessive computer use can hinder a child’s creativity, but learning how to code is an art, and a child needs to be creative and creative.

By encouraging parents to learn the code, they build their creativity and imagination. And by programming, they can acquire a variety of learning skills and find inspiration and anticipation in them.

These salaries will rise in the future. By 2020, one study at Templatemonster.com predicts that salaries will increase by 5% in the United States and 2.2% in other countries.

Former US Chief Technology Officer (COO) Todd Park said, “Many of today’s students, no matter what field they pursue to meet the demands of the 21st century and take advantage of those opportunities. Learning basic computer programming skills is essential, “he said.

Todd Park may be referring to Artificial Intelligence (AI) as one of the opportunities students will have access to in the future.

There is a risk that various jobs will be lost as AI advances in the future. When it comes to developers and programmers, their job is to create, maintain, and monitor AI applications, and demand will not be lost.

If your child is passionate about coding and wants to work in the IT arena, learning how to code while young will give him or her the best opportunity in the future. It is.

It’s never too early to learn to code. Most great athletes have grown into great athletes because they started playing sports when they were very young.

The same is true for chord learning when you are young. Even if your child isn’t interested in coding jobs, they benefit from advanced childhood development for those who live in a world where computers are essential.

Why your child is encouraged to learn Coding

WhiteHatJr offers all kinds of technology courses designed by experienced professionals in industry and academia. The courses are designed with students’ long-term skill development in mind.

After learning basic programming, you can move on to game development, data science, machine learning, application development, and research projects using a variety of technologies.

This article was written by Basic Computer Knowledge.

From kids to adults, if you’re looking for a good learning center for coding practice, feel free to contact WhiteHatJr.

1 thought on “Why Kids Should Learn Coding | Why Coding Important”