Hey, guys, so the next major Windows 10 20H2 Update is coming right up, and it’s going to be called 20H2. If you’ve been paying attention to Windows for the last two years, you probably know that things won’t be changing too much. 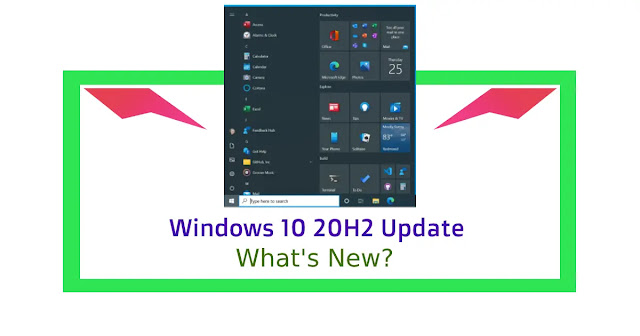 Of course, small things are changing here and there. And that’s definitely the case with age, too.

But in this update, there are a few noticeable changes that actually help with the user experience.

OK, so the biggest appearance change in this update is in the START menu. Microsoft has removed solid color tiles, which means that the action color you pick won’t be the color of your icons.

I do like this new look, but after voters do have to get on board or your money is just going to look a little inconsistent, like Amazon Prime video is looking here, adding on to that.
This also basically puts the final nail in the coffin for live tiles. Next, this one’s a no brainer, but the new version of Microsoft Edge is now preinstalled on 20H2.

The actual change out of this is that each tab will now show up as a separate task when you use the all tab shortcut. This helps a ton in knowing what tabs you have open, as well as efficiently switching between them instead of tabs.

What I usually do is I make a bunch of different windows so that I can have this view, but now I can just use tabs like a normal person and have the same multitasking view.

If you want, you can change this view in multitasking settings.

You have the option to just show the last three or five tabs or just go back to the classic view if this is weird to you.

Another new feature related to browsing is that PIN websites on the taskbar will now show all is currently open instances when you hover over it.

This isn’t going to be an edge exclusive feature. You’ll be able to do this on other browsers, too, like Chrome. The notification card itself looks a little more detailed, refined, and similar in design to the New-start menu tiles.

You now get the app names at the top of the cards. You know which app that notification is coming from. And instead of an era, we now get an extra dismissed notification.

This doesn’t totally dismiss the notification. It just gets sent to the action center where you can actually dismiss it.

Of course, you can still swipe in a way if you have a touch screen. And related to that, the general touch experience is slightly more optimized for non-tablet desktop mode.

If I tap and hold to bring up a context menu, you can see that is much bigger now. I love this little change, but I wish there was so much more of it throughout the OS. It’s really way overdue when we’ve got so many tuned ones dominating the market right now.

Moving on, there are a few small but useful changes in the settings, display settings and then advanced display settings.
You’ll now get the option to change the display refresh rate right there in the settings before we have to click display adapter properties and then go through a bunch of legacy options to change this.
Now, that option is right there, which is super convenient.
Another thing you can do now quickly copies your system specs to it anywhere you want.

When you do pass it. This is what it looks like. Most normal people probably won’t care about this, but I think it’s pretty convenient for techies and gamers to share on Reddit, the Steam community, or anywhere like that.

There’s a bunch of others under the hood features and fixes behind this update.

If you want to read more about it, you can read it in the official Windows blog and that’s it in 20H2. That’s pretty much everything there is that’s actually going to be noticeable to users so far.

I actually do appreciate these tiny changes.

I’m always worried about stability and reliability, but I think these changes will improve the user experience.

Now, what I showed you in the article is a slightly early version of 20H2, so I can’t judge too much. But this is still pretty close to what it’s going to be like in the official release when it starts rolling out to everyone in September and October.

I don’t recommend it, but if you want to try this early, you can join the Windows insider program through the beta channel, which is going to be more Sebald in the dev channel.

All right. That’s going to do for me. Thank you so much for watching this short overview of the Windows10  20H2 update.

Let me know in the comments what you guys think of this Windows 10 20H2 update and all these changes. Are you going to update as soon as it comes out or are you going to wait till it’s more stable? Let me know and I’ll see you guys at the next one.